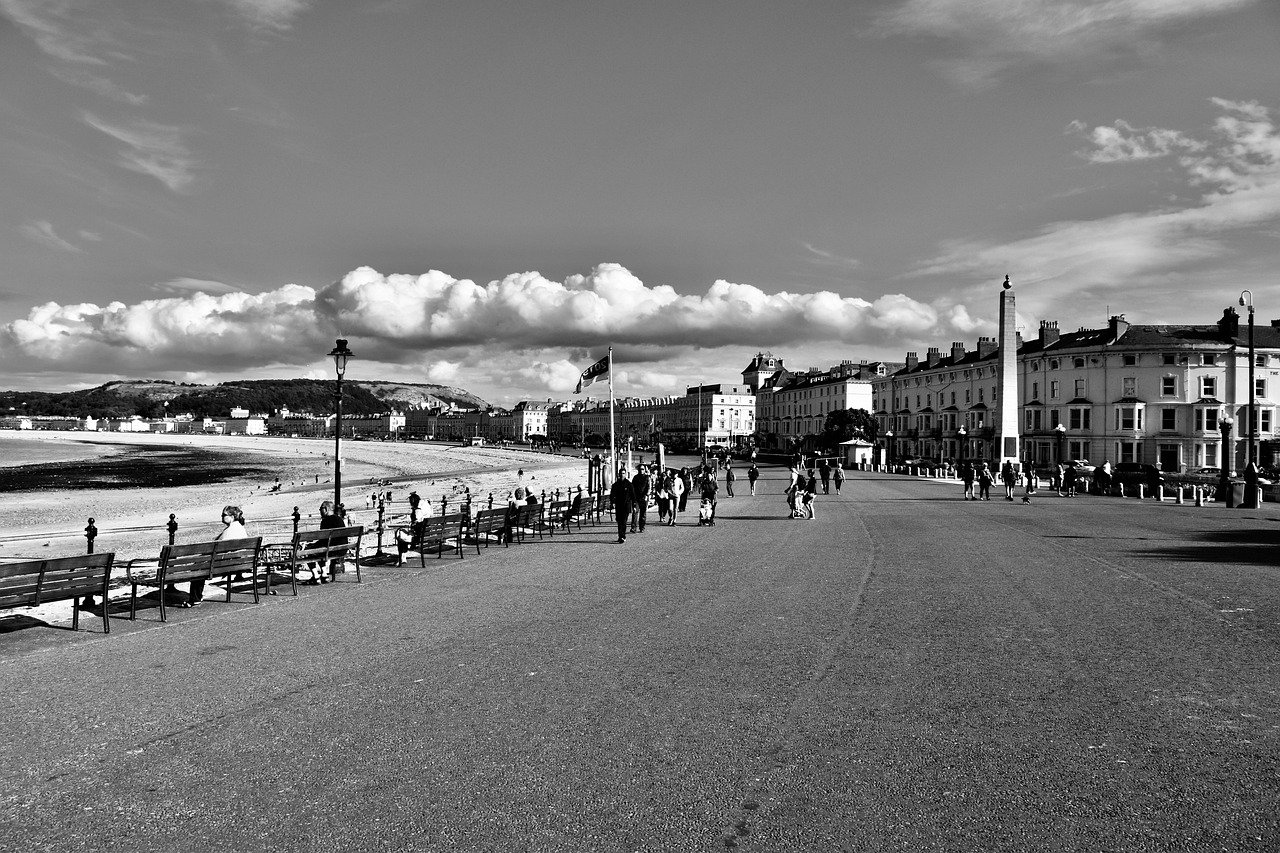 Source: Nathan Abrams (Bangor University) in partnership with Gareth Roberts (Menter Fachwen) with the assistance of Llandudno Museum and funded by The Bangor Fund ©

Llandudno owes a lot to all the Jewish families who played a huge part in the town’s development.

Llandudno has recently been described as the location of the last Jewish community in North Wales.

As early as Victorian times, the commercial opportunities afforded by Llandudno’s emergence as a holiday resort attracted many Jewish merchants. The town also developed into a popular holiday destination for Jews.

Over the years, the Jewish community has played a huge part in the development of the town – its economy, its culture, its political life and even its sporting achievement.

Over the years, Llandudno has had a significant number of kosher hotels and guest houses, each advertising the virtues of healthy sea and mountain air. The very first was opened in June 1872 by Joseph Aarons from Liverpool at No. 2 Neville Crescent on the promenade. It became an immediate success.

Over the years, there have probably been dozens, including Bodlondeb, Plas Gogarth, Broseley House and Marievillle on Church Walks. Although there was a dip in the popularity of kosher accommodation in Llandudno after its heyday in the early 1900s, there was another peak of activity during the Second World War.

Morris Wartski was born in May 1855 in Turek, Poland and, as a very young man, fled the anti-Jewish pogroms in the Russian Empire. By 1882, he had settled in Bangor where he set up his first jewellers by 1895. Whilst there, his son Charles was almost paralysed in a cycling accident. Around 1908, Wartski moved his family to Llandudno in the hope that ‘the healthy sea air’ would be of benefit to Charles. Wartski opened a shop at No. 33 Mostyn Street. Soon, one shop became three and the Wartski brand was expanded to No. 33 and No. 93. Appropriately, No. 93 is today ‘Goldsmiths Jewellers’ and Wartski’s mosaic can still be seen on the floor as you enter.

The family settled in a a large house called (at the time) Dunwood, 35 Abbey Road where tragically, his son Charles succumbed to his injuries in May 1914. Morris Wartski himself died in August 1946 leaving his wife Lily who sadly passed away just weeks later.

(5) The wedding of Emmanuel Snowman and Harriet Wartski

Emmanuel Snowman was born in London in 1886. A noted and very successful entrepreneur, he had also been Mayor of Hampstead. By the time he was 20, Snowman began courting Morris Wartski’s daughter Harriet.

They were married in LLandudno Synagogue on 19th October 1909. The wedding was a huge and lavish affair, widely reported in both the local and national press at the time and attended by Jews and non-Jews from all over the country. Such was the interest that the wedding had to be a ‘ticket only’ affair for 400 guests and ‘a thousand people stood outside the synagogue and lined the streets to see the married couple’.

Soon after, they moved to London where Snowman opened the Regent Street branch of Wartski in 1911, receiving several royal warrants. Later, the business expanded to New York attracting ‘the rich and famous’. Clients included the likes of Jackie Kennedy Onassis, Cary Grant and Bing Crosby.

Established by Morris Wartski, the Llandudno Jewry opened its first synagogue in the Masonic Hall, Upper Mostyn Street in 1909. During the Second World War, the congregation increased significantly with Jews, who were escaping bombing in large cities moving to the town.

After the war, it became apparent that a new synagogue was required. In 1948, a house called Red Court on Church Walks that had been used as a military hospital during the war came on the market. The Jewish community converted the house into the synagogue which still survives today and doubles as a Chabad-Lubavitch Retreat Centre.

By the 1910s, kosher meats from Llandudno became much sought after country-wide and were advertised in the national press. Barnett’s of London were “happy to supply lovely Devon Ox, the property of His Majesty the King, as well as a number of Prime Welsh Runt Oxen and Mountain Sheep, specially slaughtered in Llandudno”.

These animals are thought to have been those grazing on The Orme.

On 23rd August 1932, The Great Orme Tramways Company was shaken by a major accident. Whilst ‘car No. 4’ was descending the steep stretch at Tabor Hill at the upper end of Old Road, the car left the rails.

Two people were killed instantly. Among the seriously injured was Rabbi H. Levin of Manchester who had been on the tram with his wife Sarah. Levin was paralysed as a result of the accident. He died of his injuries exactly one year later, and his family successfully sued the tram company for £1,000.

The Jewish population of Llandudno increased rapidly once the Second World War broke out. As a consequence, a second (temporary) synagogue was opened at the schoolroom at the Wesleyan Ebenezer Chapel (the Emmanuel Christian Centre today) on Lloyd Street.

Adverts for ‘kosher accommodation’ boasted that they were ‘within easy reach of air-raid shelters’. Among the shelters was the colonnade along Happy Valley Road. Many Jews also joined ‘The Home Guard’ at the time.

One of the most prominent ‘kosher accommodation’ places advertised in Llandudno from the 1920s was ‘Teekvah’ (Hebrew for ‘hope’), also described as the ‘Lazar’s Private Hotel’. ‘Under commission for kashruth’ (a set of Jewish dietary laws), ‘Teekvah’ was run by Mrs Sol Lazar and such was its success that Mrs. Lazar soon opened a larger ‘kosher hotel’ called Sundown on Herkomer Crescent, West Shore. But the Lazar family is most well-known today for the department store that the family ran for many years on Mostyn Street – and later 6-8 Madoc Street – recently the Outlet store) that ‘supplied all the latest London fashions’ during the 1950s and 60s.

Joseph Lazar (Mrs Sol Lazar’s son) became the secretary of the local Hebrew Congregation during the 1960s. A keen sportsman, he was also elected captain of Lllandudno Golf Club in 1964. In November 1968, his wife Vicky was elected to the Llandudno Town Council standing as an independent candidate and 10 years later became Mayor of Aberconwy. She died in October 2019.

Born in Russia in 1882, Solomon Krupp escaped the Tsarist army and arrived in Llandudno in 1902. Together with Morris Wartski, Solomon played a big part in setting up Llandudno Jewish community. In 1922, he changed the spelling of his surname to Croop to avoid the anti-German sentiments of the time. Following the tragic death of his first wife through illness, Solomon remarried some years later and set up a well-known local business called the ‘Progressive Furniture business’, Craig y Don, Mostyn Avenue (now Corbett’s Bookies).

An Iraqi-born Mizrahi Jew, Yousif arrived in Llandudno with his family around 1918. Soon after, he took over the ‘Oriental Stores’ at 9 Mostyn Street. Tiles on the floor still say ‘Oriental Stores’ as well as advertisements above the entrance for ‘lingerie’ and ‘leather goods’. Joseph’s son Jack took over the business and was famous as being ‘the only shop open on Christmas Day’.

Jack had a brother called Robin who was quite a character and ran ‘Robin’s Cafe’ at 6 Mostyn Street for many years (the Amusement Arcade today). Robin used to stand outside the cafe at lunchtimes shouting out the menu (offering discounts to ‘pretty women’). He died in 2006 and a bench on Invalid’s Path on the Great Orme (near the famous zig-zag path on West Shore) has a memorial dedicated to him.

Today, the name of ‘H. Blairman & Son’ is considered to be one of the leading auction houses of fine arts and furniture in the world, but few know that the company was first established in Llandudno in 1884, where ‘Cafe Culture’ is based today on the corner of Mostyn Street and St. George’s. Harris Blairman arrived in Britain from Poland in the 1870s and set up his business in Llandudno soon after.

To take advantage of the tourist industry during the summer months, Blairman held auctions in a building at the end of the pier. By the end of the Great War, his son Philip Blairman had opened branches around the country. Today, the business is located at Queen Anne’s Gate in London.