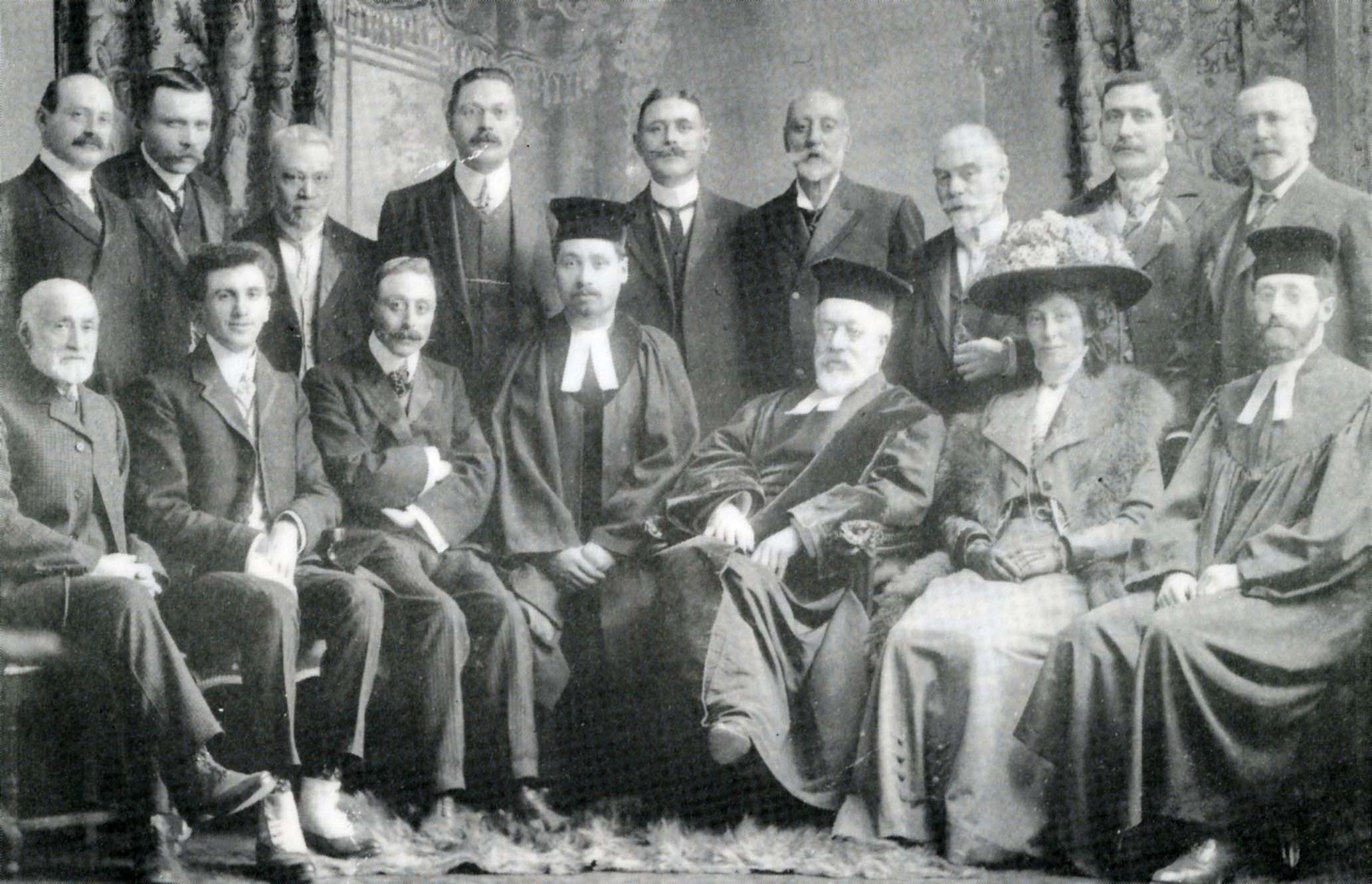 History of the Jews of Wales

Source: Cai Parry-Jones, author of ‘The Jews of Wales: A History’ & Susan Fielding of the Royal Commission on the Ancient and Historical Monuments of Wales

The population reached its peak around 1919, when the country was home to 19 congregations catering for approximately 5,000 people. However, from the 1920s onwards these communities witnessed a gradual decline.

No settled Jewish communities existed in Wales prior to the 18th century, but there is some evidence of individual Jews in the Welsh Marches during the Middle Ages.

The first Jewish community in Wales was established in Swansea in 1768, when a 99-year lease of land for a Jewish cemetery was granted to a German-born silversmith named David Michael.

Over the years the community used various spaces for worship, including David Michael’s sitting room in Wind Street, before erecting their very own synagogue building in Waterloo St in 1818. This was to be Wales’s first purpose-built synagogue.

During the first half of the nineteenth century, a small number of Jewish immigrants, numbering in their hundreds, also began to settle in other towns in South Wales such as Cardiff, Merthyr Tydfil, Newport and Pontypridd. These were trading communities, whose members migrated to the United Kingdom from various states in Central Europe to escape poverty, economic restrictions, and religious persecution in their homelands.

The quest for religious toleration and economic well-being were major motivations for migration to the United Kingdom. While most Jewish immigrants gravitated to Britain’s larger cities such as London and Manchester, smaller numbers settled in South Wales because of the potential commercial opportunities on offer in a region that was at the early stages of industrialisation and urbanisation.

As was the case with the rest of the United Kingdom, Wales’s Jewish population soared in the late nineteenth and early twentieth centuries with the arrival of Eastern European Jews who were fleeing economic hardship and anti-Jewish violence in the Russian Empire. An estimated 120,000 to 150,000 Eastern European Jews migrated to the United Kingdom between 1881 and 1914, of which approximately 4,500 settled in Wales, primarily in the south.

In the second half of the nineteenth century, the coal industry dominated the Welsh economy and transformed South Wales from a largely rural region into one of Britain’s major industrial centres. Like their predecessors, it was primarily the business and commercial opportunities provided by this burgeoning working-class centre that attracted Eastern European Jewish immigrants to the area. Their arrival resulted in more Jewish communities and synagogues springing up in South Wales in places like Aberavon, Aberdare, Brynmawr, Ebbw Vale and Llanelli.

Smaller Jewish communities also emerged in the seaside resorts and market towns of North Wales such as Bangor, Llandudno and Wrexham, partly as an overflow from Liverpool and Manchester and made up of Jews who were looking for locations to conduct trade with less competition.

By the end of the First World War, Welsh Jewry reached a peak of approximately 5,000 people and 19 communities of varying sizes, ranging from 70 individuals in Bangor to over 2,000 people in Cardiff.

Whether they arrived in 1800 or 1900, most Jews began life in Wales extremely modestly, with male breadwinners typically starting out as pedlars as it did not require too much money to start or any special skills or experience. Slinging a pack of goods on his back, the itinerant Jewish pedlar became known far and wide in both Wales’s farming and industrial communities, selling inexpensive jewellery, watches, textiles, household goods and the like from door to door on credit.

Not every Jewish pedlar prospered—many remained poor itinerant traders or worked for business owners as employees—but others were able to build up their business a bit at a time before eventually establishing small businesses in Wales’s high streets. Although most of these businesses were headed by men, their operation by and large remained a collective family effort, with wives and children often found working alongside husbands and fathers to help make ends meet.

Small numbers of Jewish immigrant men in Wales did find themselves working in primary industries such as coal mining, but most were engaged as sellers and shopkeepers in trades such as clothing, furniture, glazing, jewellery, musical instruments, picture framing, tailoring, tobacco and watch and clock repairs. Many Jews in South Wales were also involved in the pawnbroking industry and some owned real estate, while in North Wales a number of Jews ran kosher guesthouses in seaside resorts like Llandudno and Rhyl.

Jews found themselves working in these kinds of trades and industries because of the occupational restrictions they faced in both Central and Eastern Europe. In truth, the immigrant generation occupied a niche well suited to the skills they brought with them to Wales and this economic activity was to remain largely intact until the interwar period when younger generations began to spread among the professions.

Over the last 250 years Jewish people have had the freedom to practice their religion openly in the country, with each community developing its own extensive range of religious, social, cultural, educational and welfare activities.

It has been argued that the Welsh nonconformist nation adopted a ‘reverential curiosity’ towards the Jewish people. This has been explained as an affinity between two religious minority groups who had both suffered persecution, but also one of fidelity to scripture that led to Jews being perceived with pious admiration as the ‘People of the Book’. In fact, many Jews who grew up in Wales came to feel that they and their coreligionists were a well-accepted part of the country’s multidenominational nonconformist religious milieu.

However, religious tolerance did occasionally give way to prejudices, and as was the case with other newcomers and ethnic ‘others’ in Wales such as the Irish, Jews occasionally faced hostility if they were perceived to be doing too well in difficult times or appeared to be benefitting from the misfortunes of members of the ‘indigenous’ community.

In August 1911, 18 Jewish businesses were targeted for attack in Tredegar following unfounded accusations that some of the town’s Jewish shopkeepers and landlords were financially exploiting customers and tenants during a period of social and economic upheaval in South Wales. The event sparked several nights of rioting and looting of other Jewish, and subsequently non-Jewish, businesses, in towns across eastern Glamorgan and western Monmouthshire in what became known as the Tredegar Riots.

Wales’s Jews have also made their own unique contributions to wider Welsh and British society in a range of endeavours, including commerce and industry, literature and the arts, in politics, academia and philanthropy. These include, among many others, individuals such as Dannie Abse, poet; Leo Abse, politician; Heinz Koppel, artist; Judith Maro, writer; Bernice Rubens, novelist; Abe and Harry Sherman, businessmen and philanthropists; and Sara Sugarman, actor and director.

Although there was a small influx of Jewish refugees fleeing Nazism in the 1930s and Holocaust survivors in the 1940s, Wales’s Jewish population witnessed a gradual decline from the 1920s onward. By the end of the 1950s, there were 11 communities serving roughly 4,200 Jews, and by the 1990s this number had dropped to 5 communities serving 2,500 individuals. This reflected a general trend within UK Jewry of Jews gradually moving away from smaller communities to major centres, principally Manchester and London, as they offered a more extensive Jewish communal infrastructure and a broader range of career opportunities.

According to the 2011 Census, 2,064 Jews live in Wales today, but the numbers who make up the active membership of the remaining communities are much smaller. Organised Jewish life in Wales today is primarily centred on Cardiff’s two synagogues— the Cardiff Reform Synagogue and the Cardiff United Synagogue. Beyond the capital, Swansea’s small Jewish community still uses a room in its former synagogue building in Ffynone Rd for worship, while Llandudno’s synagogue has been used as a retreat centre for Hasidic Jews from Manchester since 2004. There are also small pockets of Jewish life to be found in places like Bangor and Welshpool.

While Wales’s Jewish population may have significantly diminished over the last century, a Jewish presence of over 250 years continues to make its impact within Welsh and British society today.