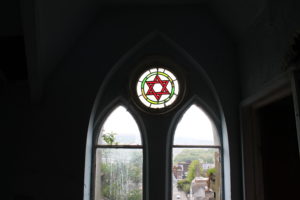 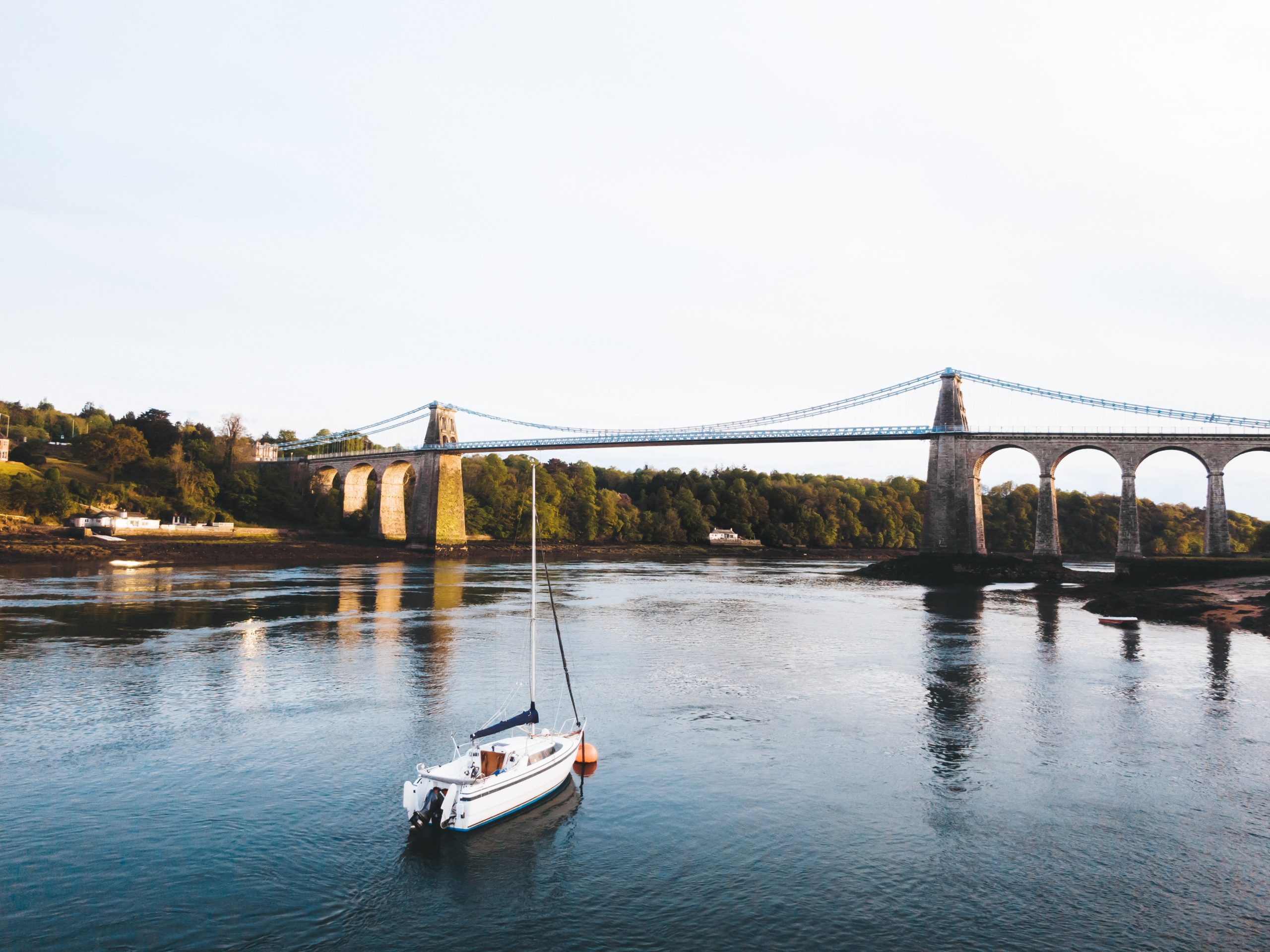 The Bangor Jewish community, never greater than a few dozen, began to decline in the 1950s, the synagogue closing in the 1960s and the congregation being disbanded in the 1980s.

There are reports of Jewish residents in Bangor from at least 1820. Other Jews began to settle in the city in subsequent decades, but it was not until the 1890s that a synagogue was established in Bangor, possibly the first Jewish congregation in North Wales since medieval times.

Among the early Jews to settle in Bangor was Morris Wartski who came from Turek, Poland in 1882 and established his first jewellery shop in the High Street in 1895 which, through the efforts of his sons and their descendants, became the world famous Wartski jewellers and antique specialists of today.

The Bangor Jewish community, never greater than a few dozen, began to decline in the 1950s, the synagogue closing in the 1960s and the congregation being disbanded in the 1980s.

Whilst building the distinctive ‘COPEC’ Houses on Seirol Road in the 1920s, the foundations of a large building were exposed – that of the Dominican Friary established ca.1237.  Although the Dominicans were not sympathetic to any local Jews, they were employed locally to keep records of Edward I’s castle building.  However, once the castle building had finished, it was decreed that ‘Jews shall not at any time dwell in the borough’ – a law that remained until the early 1600s.

This Street Map from 1834 shows that there were once more streets forking off the High Street where W.H.Smith stands today.  It was down one of these streets that Michael and Joseph Hyman had set up a watch-making business by 1820.  Joseph was known for having quite a temper and once stormed into the offices of The North Wales Chronical where he threatened the staff for 4 hours for criticising the quality of his goods.

Morris Wartski was born in Poland on 25th May 1855 from where he fled the anti-Jewish pogroms and eventually settled in Bangor by 1882 to become a licensed peddlar.  One day, Wartski was carrying his wares across the Menai Suspension Bridge when he was offered a lift by the driver of a pony and cart.  This turned out to be the Marquis of Anglesey himself who offered Wartski premises at No. 21 High Street where he opened a jeweller’s shop in 1895.  The first Jewish services in Bangor would later be held in a room at these premises.  The business was an immediate success and soon moved to 204 High Street.  Morris Wartski dies in Conway in 1946, aged 90.

Three of Morris Wartski’s sons followed him into business and were immensely successful.  Isidore Wartski opened a fine drapery at 196-200 High Street by 1918 and soon he bought ‘The Castle Hotel’ opposite, transforming it into one of the most sumptuous in the whole of North Wales.  Two of Morris Wartski’s other sons, Harry and Charles, opened a Wartski’s in Llandudno.  Later, Morris’ son-in-law Emmanuel Snowman opened a branch in London and later in New York dealing in fine Jewellery and art by Carl Faberge for the rich and famous.  From such humble Bangor beginings….

By the 1890s, the Jewish population of Bangor had grown so much that the newspapers ran appeals to fund premises for a synagogue in Bangor.  As a consequence of this, a two-roomed synagogue was opened in ’Arvonia House’ (which preceded the present building, ‘Y Gorlan’, No. 5 on the map).  There were two rooms with a wooden partition with a flap through which children could pass to father in the men’s section and back to their mother.  Congregations dwindled and the synagogue closed in 1963.  Any  Jewish services thereafter were held at the Tabernacl Chapel on Garth Road (No. 6 on the map).

Sir Montague Burton, a Lithuanian Jew, opened his clothes store at 233 High Street in 1930 (No. 7 map).  Note the foundation-stones that were laid by his children Stanley and Barbara.  In 1940, Louis Monnikendam set up a diamond polishing workshop on the upper floor of Burton’s.  As well as Jewish refugees, the factory employed local people.  The business soon expanded with a second factory set up on the first floor of 43 High Street (Brewers Decorative Store today).

Born in Russia in 1868, Philip Pollecoff escaped the anti-Jewish persecution there in the 1880s.  He eventually settled in Bangor where he first peddled matches door-to-door.  He opened his store in 1908, and when Pollecoff had his famous summer sales, crowds would queue outside for hours waiting for the doors to open.  He kept his original peddling cart in the back yard for many years.  ‘Peacocks’ occupies the store today.

Among the first Jewish families to move to Bangor during the Second World War were Philip Shafran and his wife Lily.  They ran Bangor’s first delicatessen (No. 11 on the map) from 1939-1963, often with queues forming on the pavement outside.

‘Headmasters’ hairdresser occupies 211 High Street today (No. 12 on the map) but for many years from the 1890s this was once Joseph Owens Kosher Meats butcher’s shop supplying prime kosher beef, lamb, veal and the celebrated Welsh mutton.

By 1851, John Aronson’s Fine Jewellery shop stood where the HSBC Bank stands today (No. 13 on the map).  In 1869, over £600 worth of fine jewellery which he was transporting by train to a client in Southampton went missing on route.  Unfortunately, it had not been insured and Aronson soon gave up his business and moved to Manchester.

Isidore Wartski had always aspired to building “a modern castle by the sea”.  By the 1930s his dream came true.  Y Deren Deg, overlooking the Menai Straits, is one on the finest houses in Bangor.  When war broke out in 1939, Isidore had become the Mayor of Bangor and began taking in Jewish refugees.  He also stockpiled food in a spare room to give to the needy but this was illegal during the war and Wartski only escaped prosecution thanks to his connections.

Mayor Wartski was however commended for providing a safe haven for the contents of the Montefiore Jewish Museum of Ramsgate and the Jews College library at Derwen Deg for the duration of the war.  He was a very popular Councillor and Mayor, in particular for the role he played rehousing people from disease-ridden slums of Hirael to the modern estates of Coed Mawr and Maesgeirchen.

In 1968, three years after his death, his wife Winifred Marie bought a number of fields at Nantporth Farm, Holyhead Road and donated the land, Wartski Fields, to the people of Bangor in his memory.

The Caernarfon & Denbigh Herald of 23 October 1896 records the court case following a terrible and extremely violent attack on Moses Aaranson and Julius Rutkowski a couple of weeks previously.  It is the only antisemitic assault ever recorded in Bangor.

On the morning of the 9th of October, Aaranson and Rutowski were walking past St. James’ Church, Holyhead Road when they were set upon by three local men, John Jones, George May and David Hughes who inflicted grievous injuries upon them.  Somehow, Rutowski managed to crawl to an adjacent barber’s shop (‘Bella Bella’ Pizza shop today), but his assailants followed him there and continued their assault whilst Aaranson lay unconscious. In court, they were jailed and fined.

During the Second World War, Isidore Wartski made arrangements for up to 60 Jewish evacuee children to be fed kosher meals at a temporary canteen based in St. James’ Church hut.  Locals remember the Hall fondly for its youth clubs and dances. Was known locally as ‘The Tin Hut’ and ‘The Sixpenny Hop’ and ‘Jimmy’s Hop’.  New houses called Trem y Ddina occupy the site today.

Born in Russia, Joseph Bolloten became a successful businessman selling musical instruments at 22 College Road and was known for his sense of humour.  For many years during the early 1900s he sponsored and ran limerick competitions in the Welsh press.  Over 300 competitors at a time would enter to win some cash prizes donated by Bolloten himself.

Son of Joseph Bolloten, Burnett was born in Bangor.  He never got on with his “domineering” father and in 1928 was sent abroad to buy diamonds.  Whilst away, Burnett developed an interest in European politics and began writing about it.  This was the beginning of a glittering career that made him one of the most renowned political commentators of his generation.  When he emigrated to America in 1948 he became subject to anti-communist investigations.  His 1979 book ‘The Spanish Revolution’ remains the definitive book on the Spanish Civil War to this day.  He died in California in 1987.